In Japanese culture, cherry blossoms or sakura represent the value of time. The hanami or cherry blossom viewing is a seasonal tradition that both locals and foreign visitors enjoy.

This year, the cherry blossom bloom in Japan is anticipated to happen around the latter days of March and first weeks of April.

In Kyoto, tourists and locals flock to the Maruyama-koen Park, Imperial Palace, Kiyomizu Temple, and Yasaka Shrine for hanami. Another popular site for sakura is Kinosaki, just a 2.5-hour train ride from Kyoto. Kinosaki is known for its therapeutic hot spring bathhouses most of the year, but in the spring the cherry trees lining the town’s Otani River are a great place to stroll.

While Japan is the go-to for sakura due to its numerous hanami spots, other towns and cities across the globe also celebrate the brief beauty of the blooming cherry tree. Here are the cherry blossom forecasts around the world for 2018!

Brooklyn’s Botanic Garden in New York City holds one of the widest and most diverse assortment of cherry blossoms found outside Japan. Also happening in NYC is the Buffalo’s Cherry Blossom Festival at the Japanese Garden of Buffalo in Delaware Park.

Washington DC hosts the National Cherry Blossom festival annually to honor the gift of 3,000 cherry trees that arrived in that nation’s capital in 1912. The trees were a gift from then mayor of Tokyo, Yukio Ozaki.

The Missouri Botanical Garden also showcases their cherry trees this season. The cherry trees and other fruit trees occupy 14 acres of the garden.

The city of Macon in the state of Georgia hosts one of the biggest international cherry blossom festivals in the world.  This year, the festival will run from March 16 to March 25.

During the festival, Macon is awash in huge areas of pink blooms. People flock to see the blossoms and enjoy the festival’s concerts and street parties. The best place to be is the Central City Park with its 300,000 Yoshino cherry trees.

Jinhae Gunhangje Festival is Korea’s largest cherry blossom festival with approximately two million visitors participating yearly. While you will need to take a four-hour bus ride from Seoul, the trip is well worth it to bask in the sea of pink blooms.

If you don’t feel like leaving Seoul, you can still catch the blooms at the Yeouido Spring Flower Festival which features 1,886 Korean cherry trees.

Aside from the beaches and fresh seafood, visitors to Jeju may also celebrate spring at the Jeju Cherry Blossom Festival. The blooming of yellow canola flowers is also celebrated at the same time.

First week to the third week of April

Vancouver hosts the Vancouver Cherry Blossom Festival annually with over 40,000 cherry trees sprouting pink and white blooms in the city. As part of the festivity, the city parks also play host to art classes, musical performances, and good food areas.

Around second fortnight of March until April

In spring, the Jerte Valley in Spain’s Extremadura region transforms into a white haven of blossoming trees.

El Parque de los Quintos in Madrid is also lush with white cherry blossoms around the same time of the year.

While this country is known for celebrating tulip’s during the spring, they also appreciate the delicate beauty of the cherry blossom.

During the annual Cherry Blossom Festival in Amsterdam, tourists can enjoy picnics and other events under awnings of soft pink blooms. In the Westerpark, the Japanese Women’s Club paid tribute to tsunami victims in 2000 by planting cherry trees. Today, around 400 blooming trees grace the area.

The Iron Lady aka the Eiffel Tower is beautiful among the hues of spring. The enchanting and colorful walkways of Champs de Mars park, Square Gabriel Pierné, and the hidden central courtyard at the Petit Palais are graced by the fleeting beauty of the cherry blooms.

The south facade of the Notre Dame, Parc de Sceaux, as well as the Jardin Anne-Frank also sport astounding sakura canopies during this season.

This year, the Copenhagen Sakura Festival will be held on April 28 and 29. Enjoy the sight of the more than 200 cherry trees in Langelinie Park.  The celebration is part of the 150th anniversary of the Japan-Denmark diplomatic relationship.

The Kungsträdgården, known as The King’s Garden, will feature not only the beauty of cherry trees but also other cultural activities as the city of Stockholm celebrates150 years of diplomatic ties with Japan. This year on April 21, a two-hour stage program is being prepared, featuring a Bunraku puppet show and Japanese traditional music and dance.

The cobblestone alleyways of the city of Altstadt in Bonn, Germany are transformed into tunnels of lush pink blooms during springtime. The trees were planted during the 80’s and have now become one of the city’s favorite and most famous attractions, aside from the Beethoven House.

The first Japanese cherry trees in London were planted at the Kew’s Rose Garden behind the Palm House and King William’s Temple in the early 1900’s. More were added in 1935.

(Read: Taiwan Travel Guide: Don’t Miss These Places On Your Next Trip To This Now Visa-Free Country)

Just at the outskirts of Taipei is the Tianyuan Temple. During this period, the temple grounds are awash with blooming cherry trees.

Shanghai’s Gucun Park has more than 12,000 cherry trees with over 60 varieties. Other surrounding parks like the Gongqin Forest park are also filled with cherry blooms at this time. There are also often cultural shows and other activities. 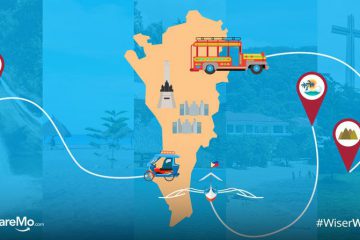 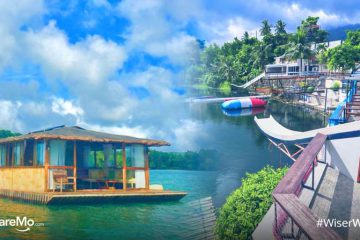 5 Best Affordable Resorts In Laguna That Are Not In Pansol 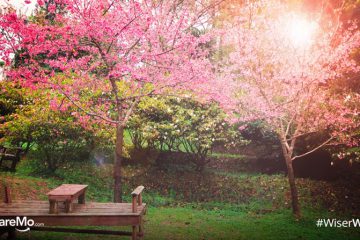