The President’s State of the Nation Address (SONA) is finally over. Despite President Duterte often veering away from his script and the occasional swearing, he delivered some points that are worth noting.

Putting aside his concerns on Martial Law in Mindanao or his continuing crusade against illegal drugs, let’s break down his talks about money, taxes, infrastructure, and anything in between.

What are the promises Digong delivered to the people? What are the plans he laid out for the public? Here’s what the public should expect in the next 365 days of his Presidency.

The fate of the tax reform is now in the hands of the Senate. Ano ba ang gusto ninyong gawin, magluhod ako diyan? Well really, I leave it up to you. We are all Filipinos. If you think that’s a waste, fine! If you think, it’s not good, it’s okay with me. I can survive. I call on the Senate so support my tax reform in full and to pass it without haste.

Last May 31, the House of Representatives finally approved the Tax Reform for Acceleration and Inclusion Bill (House Bill 5636). Voting 246-9-1, the Lower House approved the tax reforms promised by the Duterte administration such as reorganization of the income tax brackets, additional fuel and sugar-sweetened beverage taxes, excise on automotive, among others.

Now that the bill is out of the hands of the congress, the President is now asking the Senate to pass the tax reform “in full and pass it without haste.”

On mining and other natural resources

What is more important is that we convert the raw material thereof into finished products for international and local purposes. That way, it will not only be the few who are the rich but also the poor who are many who will benefit therefrom.

I call on our industrialists, investors [and] commercial barons to put up factories and manufacturing establishments right here in the Philippines to process our raw materials into finished products.

So I will increase the taxes. Then I will think of something that will compensate or make up for the damage or at least the income restored.

Otherwise, I’ll have to stop mining. I will ask you to stop it. It’s not good. We are a small group of islands, hindi naman marami. The coastal, marami yan kasi marami paikot-ikot, but we are in a contiguous territory, maliit lang tayo.

It is no secret that the Philippines is a gold mine itself. According to statistics released by the Mines and Geosciences Bureau, the country produced a total of P179.7 billion in combined large scale, small scale, and non-metallic mining activities in the country.

However, a huge chunk of these materials extracted are shipped overseas for production. The President understands that the country will benefit more from processing these raw materials, and so he would like the nation’s moguls to take the matters in their hands and instead to let the country from our own products.

Before yesterday’s SONA, President Duterte already expressed his intent to levy mining companies with higher taxes, there were already reports that he floated the idea to the public.

In an article published by BusinessWorld, the President said he wanted higher taxes for the mining companies because “the taxes are low.” In addition, he also wanted miners to be honest in their declaration of income.

We now talk about our overseas Filipinos. They are our heroes. They and their families have sacrificed much to the—for the country. We all know how a large part of our economic—economy comes from their remittances.

That is why to ensure that their rights are protected, I ordered the increase of our assistance to the OFW from P400 million to more than P1 billion.

Last May, remittance from overseas Filipino workers (OFWs) have reached another all-time high. The amount sent by OFWs reached $2.31 billion, which is 5.5 percent higher than May 2016’s record.

With OFW remittances comprising one-tenth of our gross domestic product, the Duterte administration wants to take care of “modern-day heroes” and increase the cash assistance to them with P1 billion.

Infrastructure projects. We will make the next few years the “Golden Age of Infrastructure” in the Philippines to enhance our mobility and connectivity, and thereby spur development growth equitable in the country. In other words, we are going to Build, Build and Build.

One of the more prominent agenda of the Duterte administration aside from weeding out drug dealers is putting a premium on building infrastructure as part of his “Dutertenomics.”

According to Finance Secretary Sonny Dominguez, the government will allot P3.6 trillion on projects, which will be started from 2018 to 2020 in a bid to kick off the “golden age of infrastructure.”

I am directing the MMDA and the LGUs of Metro Manila, as well as the LGUs of Metro Cebu and all our regional centers to ensure the free flow of traffic, and immediately clear our roads and thoroughfares of all unnecessary obstruction, including vehicles parked on the streets/barriers.

Sanctioned by the government, and penalize all traffic obstructionists regardless of stature—sometimes, hindi mo maano diyan, because the police, it’s a cabinet member.

The idea of hauling off cars that block the roads has been mentioned by Duterte during his campaign last 2016 elections. However, there was no follow-up since occupied Malacañang.

However, it seems like he is still dead serious in decongesting traffic not just by spurring infrastructure projects but also by removing illegally parked vehicles that obstruct vehicular flow. We have yet to see the implementing rules and regulations in case the MMDA follows up.

What do you think of the President’s 2017 SONA ? Share your thoughts in the comments. 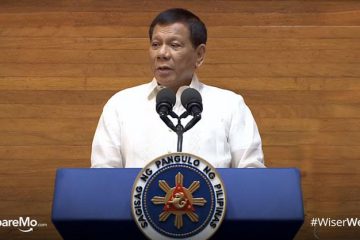 Tax Reform, Road Congestion, OFW Cash Assistance, And The Other Finer Points Of...