As a car owner, of course everyone wants to give their vehicle some personal touch. Some do this with bespoke wheels, a nice paint job, custom interiors, and on-board entertainment. Some go the extra mile with performance-enhancing mods such as turbo engine kits, fuel injectors, and suspension.

Others? Well, let’s just say they kind of overdo it. While some custom accessories look nice and are legal, there are mods that are utterly pointless—and in fact pose hazard to other motorists on the road.

If you’ve been branded a kamote driver at some point, chances are your vehicle is adorned with these parts you got from heaven knows where. We’d like to appeal to reason and ask you to reexamine your taste in accessories because honestly, these aftermarket parts are sure to get you fined.

If you’re part of a Facebook group dedicated to bashing kamote drivers, then you’ve probably seen a lot of videos about blinking taillights. Like Christmas lights on the road, they are a definite head turner—for all the wrong reasons.

Now before you call us bashers or haters, let’s look at the Marcos-era law called Presidential Decree No. 96. According to this decades-old law, it is illegal to install accessories that create loud and unsettling noises “including dome lights, blinkers, and other similar signaling or flashing devices.”

This is where it gets interesting. There is no mention of strobe brakelights there, which can be a common argument of your average kamote driver. They might even argue that their Christmas taillights haven’t caused any accidents. Yet.

So why do car owners install this? Of course, looking cool is important, especially if you’re driving a vehicle that looks like everyone else’s. In addition, it makes the person feel like he’s an important person on the road, especially that it mimics the blinkers of emergency vehicles.

Does it convey any information to other motorists like turn signals or brake lights? If not, then you just turned your car into an ambulant Christmas ornament. Why not play Jose Mari Chan’s “Christmas in Our Hearts” while you’re at it to complete the experience?

Is it pointless? Yes. And annoying, to boot.

Is it dangerous? Oh, definitely. It can distract other drivers, especially at night.

There’s something very Mad Max-esque about spike caps, especially when you’re sharing the highway with lawless and savage elements. In this dog-eat-dog world, it’s better to be ready against wild drivers and equip yourself with spikes that will deter them from getting too close to your vehicle.

When you search for “wheel spikes” on your favorite online marketplace, they have interesting descriptions such as “best decoration and protection for your car.” Protection against what? Only one thing comes to mind: fellow unruly motorists.

Aside from “protection” against…something, what else is the purpose of this? Message us if you’ve thought of a proper use of spike wheel caps. Until then, stick to your stock valve caps and acorn nuts instead of these pointless pointy things.

Is it pointless? Like a peephole on a glass door.

Is it dangerous? If you’ve seen Scream or Final Destination, you know how dangerous it can be.

Pretty sure you’ve seen it before: a small stuffed toy hanging just right beneath a vehicle’s rear bumper, just swinging there at inertia’s command. Turns out, there’s a name for them: drift charms.

So why do drifters attach these lovely stuffed animals under their rear bumper? So that, whenever they show people their drifting skills with tight cornering, these charms would seem like they’re “floating” behind the vehicle. In addition, they also serve to signify that the car is owned by a drifter who, like a prizefighter, is up for a challenge.

However, the drift charm has a deeper history with the Japanese subculture called bosozoku, which are Japanese car and motorcycle gangs that gained peak notoriety in the eighties and nineties. As a symbol of rebelliousness and freedom, they would steal train handles and hang them on their vehicles.

From a subculture symbol to a secret code between racers, drift charms have devolved into something useless. Since most of our roads are clogged, you won’t even be able to make that stuffed toy swing. And if you’re driving a vehicle that you have to accessorize just to make it more beautiful, we’re pretty sure it can’t drift, anyway.

Is it pointless? Like a camouflage pattern painted on a golf ball.

Is it dangerous? Only if it gets caught on to something and rips your bumper apart.

It’s okay to admit you’ve played Need for Speed before. After all, who in his right mind in the early 2000s hasn’t?

Remember those tacky body kits and decals you would clip on your virtual car? Well, in the game, no souped-up car was complete without underglow kits, of course.

While they make sense in a video game, there is absolutely no reason for you to install car chassis lights in your car. One, it doesn’t aid you or other drivers in having a better and safer driving experience. Two, it’s pointless in a sense that it doesn’t illuminate anything other than the ground.

In parts of the United States like California and Michigan, ground effects lighting is illegal on the road and drivers with underbody lights will be penalized if caught. Meanwhile, Alaska prohibits the use of red, blue, and green underglow lights because people might confuse these lights as emanating from emergency vehicles.

Like strobe taillights, these aftermarket parts may seem harmless at first. But they can distract other motorists and cause car accidents. If you have them installed under your car, turn them off because honestly, they’re a major turnoff.

Is it pointless? Like a toilet cubicle with see-through glass partitions.

Is it dangerous? It can be distracting and lead to road accidents.

5. Mask on the headrest

Is it pointless? Like the word “machine” after ATM.

Is it dangerous? Only if you have heart problems, which don’t include breakups. 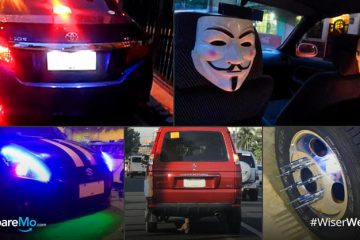