What Will Happen When The Peso Drops To P49 Versus A Dollar?

Experts predict the peso will be at its weakest toward the end of 2016. Here’s why you shouldn’t be worried.

The exchange rate of the Philippine peso against the US dollar has never been at an all-time high. Around 10 years ago, exchange rate service provider XE recorded the highest exchange rate at P53.52250 to a dollar—and history seems to be repeating itself.

“We think we are going to see a gradual pressure on the currency this year,” Divya Devesh, foreign exchange strategist at Standard Chartered, told Rappler, pointing to slowing remittances from overseas Filipino workers (OFWs) and equity outflows as the main reasons.

With the price of dollar getting higher, there are now questions about the economy and its effects on every Filipino. Is there any reason people should be alarmed? What are the repercussions of higher exchange rate?

The importance of the exchange rate

Every day, we see the exchange rate of the peso to a dollar reported in the news. To those who have OFW family members toiling day in and out overseas, knowing when to exchange their hard-earned dollars will spell a huge difference. For the average Juan, however, the effect of the movement of the exchange rate is also significant.

1. It serves as the basic link between the local and the overseas market for various goods, services, and financial assets.

3. Exchange rate movements can affect the country’s external sector through its impact on foreign trade.

4. The exchange rate affects the cost of servicing (principal and interest payments) on the country’s foreign debt.

Foreign exchange rates can help us make informed decisions, whether on bigger economic actions, such as making overseas investment, to small ones, like knowing the best time to trade your US dollars for maximum exchange.

The upside and downside

When the exchange rate between dollar and peso is high—meaning you need more peso to buy one US dollar—it may seem like the local currency may be underperforming. However, there are instances where having a higher rate may prove to be advantageous to us.

According to Ben D. Kritz, columnist for the Manila Times, there may be times that weaker peso may entail better economic effects than a strong one. “In general, a weaker peso supports exports by effectively making them less expensive,” he wrote. “Increased export activity should lead to expanded production and employment, and contributes directly to GDP by reducing the trade deficit or increasing its surplus, whichever the case may be.”

Aside from better export prices—especially that the Philippines recorded a new high of exports at USD 61.6 billion in 2014—OFWs—also rely on a higher exchange rate to provide more money for their families in the country.

According to the BSP, while the final amount of remittance for 2015 is yet to be published, the difference between 2014 and 2015 remittance from January to November is $22.031 billion and $22.830 billion, respectively. A higher dollar value may mean more purchasing power for Filipinos, which can keep the wheels of the economy turning.

However, there is also a downside to a higher exchange rate—and this can mean dismal effects to the economy. Basic commodities imported like crude oil and coal will become more expensive, which in turn will lead to higher prices of trade goods in the country.

While oil should already be expensive today, given the fact that the exchange rate is above P45, cheap crude oil from Middle Eastern countries softens the blow of an expensive dollar.

Should people celebrate now that the exchange rate is high? Not quite, since extremes have both upsides and downsides. The good news is that despite the foreseeable depreciation of the peso, it remains the strongest currency in Southeast Asia. However, we should stay vigilant and know what to do in case the negative effects start to kick in. –Dino Mari Testa 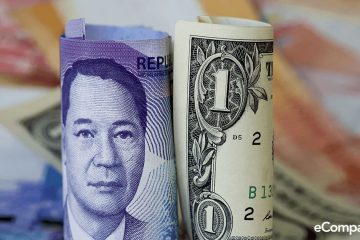 What Will Happen When The Peso Drops To P49 Versus A Dollar?