What could’ve happened in case an ostrich running amuck suddenly decides to mercilessly attack your vehicle? Is there any way your insurance provider will cover the damages caused by an animal on the loose—in this case, an ostrich?

At this point, you’ve probably already seen this video that proved how bizarre 2020 is: An ostrich was seen running on the streets of a certain subdivision in Pasong Tamo, Quezon City. The flightless bird was seen running past parked vehicles and motorcycles on the main road of Mapayapa Village III.

In one of the videos caught by a resident of the area, the ostrich was seen majestically strutting behind a vehicle.

And if you think that’s the end of the story, it gets worse (or better, if you ask us): There were actually two ostriches that went loose and roamed the main road of the said Quezon City subdivision.

To prevent the birds from further straying, multiple people tried to block off the bird’s way. In another video, a guard was seen lowering the barrier of the subdivision gates, causing the bird to get spooked and just turn around. Meanwhile, another man was caught on video blocking the bird with a…broom.

Eventually, Manila Bulletin reported that the birds have been returned to their owner’s home, who is a resident of the said subdivision. The story ends and we all live happily ever after, right?

Read: Pros And Cons of Getting Additional Car Insurance Coverage

The ostrich in the videos can be seen near vehicles. If you’re wondering if a bird like that can damage your vehicle, here’s a little tidbit about those flightless birds.

An ostrich (scientific name Struthio camelus) can stand up to almost three meters tall and weigh more than 150 kilograms. Its long and slender legs are the bird’s primary defense mechanism.

According to Encyclopedia Britannica, a “frightened ostrich” can run up to 72.5 kilometers per hour, which is 25 percent faster than the cars plying Edsa if they follow the maximum speed limit.

As if its speed isn’t scary enough, the most terrifying part of the said bird is its kick, which has a force of 2,000 pounds per square inch (PSI). To put it in perspective, a professional boxer’s uppercut has a force of 800.

Now make it almost triple—and put it in its legs with razor-sharp talons. Keep in mind that its kicks are known instantly kill predators such as lions and even humans.

With a forceful kick like that, it’s no surprise that an ostrich can easily damage your car. Now what happens when an animal gets loose and at the height of its rampage wrecks the exterior of your vehicle?

Let’s go back to the ostrich scenario: What if the animal damages one of the vehicles it came across?

For starters, if an animal escapes and causes damage, the liability will fall under the owner or the current caretaker of the animal. According to Article 2183 of the Civil Code of the Philippines, “The possessor of an animal or whoever may make use of the same is responsible for the damage which it may cause, although it may escape or be lost.”

What does it mean? Whoever was in possession—whether the owner or the caretaker—will be the one liable for all the damages caused by the loose animal.

And if there’s an element of negligence from the party in possession of the animal, you have another recourse under the law: filing for damages based on the concept of quasi-delict.

Article 2176 of the Civil Code of the Philippines states that “whoever by act or omission causes damage to another, there being fault or negligence, is obliged to pay for the damage done. Such fault or negligence, if there is no pre-existing contractual relation between the parties, is called quasi-delict.”

Now, anyone who has a flightless bird in its vicinity definitely has the financial capacity to pay for any damage cause by their animals. After all, Republic Act No. 9147 (or the Wildlife Resource Conservation and Protection Act) states that ownership of wild animals is permitted as long as they can “prove financial and technical capability and facility to maintain said wildlife.”

But what about from your side? How will insurers react from this?

Read: Should You Buy Car Insurance For An Idle Vehicle?

To help us clarify this issue, we spoke to our resident insurance experts Katrina Maximo and Lorraine Briones and asked her how insurance providers can protect their customers in case of a wild animal runs amuck.

To be specific, we asked her if a comprehensive car insurance is enough to cover the cost of repairs due to animal damage or acts of nature addon is necessary for this curious scenario.

“Acts of Nature, otherwise known as Acts of God coverage, is a valuable add-on we offer to our customers who want extra layer of protection for their hard-earned vehicles. This additional coverage includes financial protection for your car from typhoons, flooding, volcanic eruptions, earthquakes, landslides, and wild animal damage,” she said.

However, Katrina clarified that animal attacks, such as our theoretical ostrich scenario, is not considered under the animal clause of the Acts of Nature coverage.

She explained that attacks from wild animals that are beyond the control of any human and whose ownership cannot be traced are the ones that can be filed under the said car insurance add-on.

“For an animal’s damage to be considered under this add-on, it has to come from wild ones who obviously have no owners. Think of migrating birds, for instance. No human can control them,” said one of our in-house insurance experts.

If things seem hopeless for you now, don’t worry. According to Katrina, some of eCompareMo’s partner insurers have already given word about the theoretical scenario. Spoiler alert: they have different answers.

“Three of our partners have already confirmed that the hypothetical scenario involving ostrich can be filed under own damage, which according to them is just a formality to process the repairs as soon as possible. If a kept ostrich gets loose—or any animal, for that matter—and starts attacking your vehicle, our customers can file a claim through our Car Insurance Concierge portal and we’ll take care of the process for them, no questions asked,” Lorraine said.

“For one of our partners, animal damage to vehicles such as scractches and dents are not covered unless they’re caused by a collision. Meanwhile, another insurer partnered with eCompareMo said that any animal attacking your car can be filed under third-party property damage,” she added.

“Whatever the case is, we make sure that all car owners who get their car insurance through eCompareMo will get all the help they need. That’s our promise to our customers.”

We all know that ostriches gone wild are not a common scenario. However, it’s hard to ignore the potential damage of these animals to people and vehicles.

At least now, we know what to do in case the scenario is much, much worse than yesterday’s. This year has been really weird. 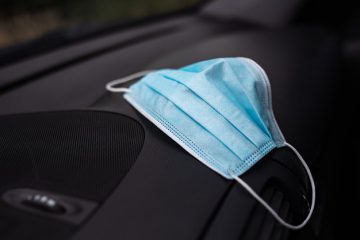 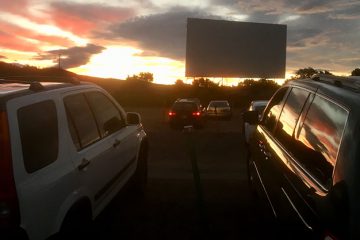 Drive-In Cinema In Pampanga? Why Outdoor Movie Theaters Didn't Exist In The Philippines... 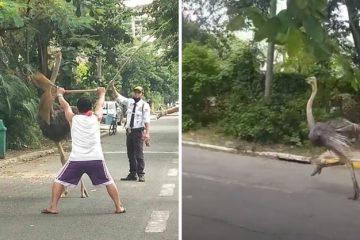