On July 15, 2018, he garnered his 60th career win via a technical knockout of Lucas Martin Matthysse. Pac Man has proven that he still has the chops despite his new set of priorities, not to mention his age.

Now it’s time to talk about one more thing Manny earned from that fight: Money.

Pacquiao has built quite a kingdom with his fists. Despite the criticisms hurled at him, he’s still a self-made billionaire and a global icon. Not much is written about how much Manny Pacquiao really earned after his bout with Matthysse, so we did the math.

There is no doubt that Manny is swimming in billions. According to the 2017 Statements of Assets, Liabilities, and Net Worth of Philippine Senators, the boxer ranked second place in terms of net worth with a value of P2.9 billion. The only senator who was able to outrank Pacquiao was Senator Cynthia Villar with a net worth of P3.6 billion.

With an almost P3-billion net worth—not accounting for the fact he lost P126 million during that year, as well—it seems like Pacquiao is looking toward a big win after knocking out Matthysse.

In a report by the Philippine Star, Pacquiao’s main money man Michael Koncz said that the boxer from General Santos City will be bagging a sizable purse during this fight.

How big? The report said it’s bigger than what he earned from his three previous fights.

Although there is no solid “official” number provided to the public, we’re going to try to do the math.

Pac Man earned the following amount from his fights prior to defeating Matthysse:

All in all, that’s $34 million worth of earnings.

If you think that amount is already big, converting it to pesos will translate to the staggering amount of P1.81 billion.

Although it’s lower than the initial conversion, it’s still insane that he earned nine digits after three fights. The winnings are so big that even the Matthysse camp was tight-lipped about their fighter’s projected earnings. If we’ll take into consideration what Koncz said, we might be looking at a P2-billion purse for the senator.

Again, this is just speculation. But even if the real figure is over or under this assumption, there’s no doubt Manny is still making money rain from the sky.

The People’s Champ has come a long way since he turned professional in 1995 at the age of 16. According to a Bleacher Report article, his first bout as a prizefighter gave him a paycheck of P100. Now, each fight yields Pacquiao millions in dollars.

How did Manny Pacquiao fare in his last few bouts? Let’s look at the fights he had since 2011:

Without including his prize earnings from the bout with Matthysse, Pacquiao bagged a total of $310 million. In Philippine pesos, he earned—hold your breath—a whopping amount of P16.57 billion.

So what happened to the rest of the money? Well, let’s just say the Bureau of Internal Revenue happened, as well as some investments here and there. Actually, who knows what happened to his money? 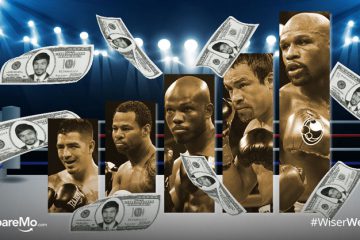 Pacquiao's Fight Earnings Through The Years—And How Much He Could've Made From The...