Manny Villar Is Now The Richest Man In The Philippines, According To Forbes’ 2019 Billionaires List

Businessman, property tycoon, and former senator Manuel “Manny” Villar has made it to the top of Forbes list of Philippine billionaires.

Villar has been steadily climbing the list, coming in at the 12th spot in 2017 with a net worth of $1.5 before skyrocketing to the No. 2 spot last 2018, with a $3 billion net worth that placed him just behind the recently deceased Henry Sy.

Sy, the man behind SM the largest chain of malls in , had been the Philippines’ richest man for 11 years—first during 2007 and then again in 2009, where he held the position until 2018. He passed away in January 2019.

Runners-up in the list John Gokongwei Jr., JG Summit Holdings. He climbed to the second spot from third last year with a net worth of $5.1 billion dollars. He ranks 343rd globally.

Owning the third spot this year and coming in as 379th in the global list is gaming tycoon, owner of Solaire Casino and Resort, of International Container Terminal Services, Enrique Razon Sr. He has a net worth of $4.8 billion.

Lucio Tan, who is known in the field of banking, property, spirits, and tobacco development, took the fourth spot and 436th in the world with a net worth of $4.8 billion.

Jollibee’s Tony Tan Caktiong and his family are now on the fifth spot, a notch up from being on the sixth spot last 2018. With an worth of $3.9 billion, Caktiong is at the 529th spot globally this year.

Ramon Ang, owner and President of San Miguel Brewery and Eagle Cement, owns the sixth spot in the country and 775th worldwide with a net worth of $2.9 billion.

Meanwhile, the seventh spot locally and 838th worldwide belongs to Megaworld Founder and McDonald’s Philippines head Andrew Tan with a total net worth of $2.7 billion.

The name “Sy” has not dropped out of the list completely, though, as the children of Henry Sy are still on the list.

Hans, who is the fourth child of Sy Sr., leads his siblings, bagging the eight spot on the 2019 list. With both having a total net worth of $2.4 billion, Hans is tied with his brother, Herbert Sy, at the 962nd spot worldwide.

at the ninth and 1057th are the other siblings, Henry Jr., Harley, and Teresita Sy-Coson, each having a total net worth of $2.2 billion.

The last sibling, Elizabeth Sy, took the 10th spot with a net worth of $1.9 billion.

Eduardo “Danding” Cojuangco and Robert Coyiuto Jr. are tied at the 11th spot with worths of $1.4 billion.

The 12th place belongs to Ricardo Po Sr. and who are in the food business, with Century Pacific and in particular. Po is also a player in the properties sector, to bring their total net worth to $1.2 billion.

A directory of billionaires

A total of 17 Filipinos made it to Forbes’ 2019 list of the World’s Billionaires, published in March 2019. Here they are:

(Read: Which Industry Has Made The Most Number Of Filipino Billionaires?)

The 17 Filipino billionaires’ combined net worth amount to a total of $47.7 billion, $7.5 billion lower than last year’s figure of $55.2 billion with only 12 billionaires.

Forbes’s 33rd annual ranking included a total of 2,153 billionaires from around the globe.

Regionally, Asia-Pacific has the most billionaires at 767, with a total net worth of $2.5 trillion. Notably, China has the highest number of newcomers this year at 44 as well as the most drop-offs at 102. 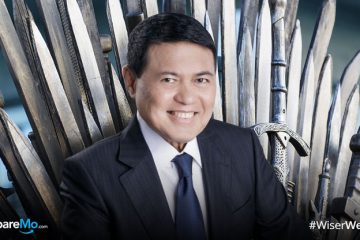 Manny Villar Is Now The Richest Man In The Philippines, According To Forbes’ 2019...