ADVISORY: eCompareMo is ready to serve you completely! We are now accepting applications for credit cards, personal loan, and car insurance.
10 min. read

There are subtle differences between the two, and some of them may surprise you.

Technology may have made our lives much easier, but as our jobs became less intensive, the pressure to turn in more tasks in a single day has become the disease that has afflicted our workforce. Because of this, some workers may look like they’re busy—but in reality, they may just be giving off the illusion of hard work. Are you a member of the workaholic generation?

Fortunately, someone has already been able to differentiate the two. Jullien Gordon, a corporate speaker and founding partner at performance consultancy firm New Higher, has drawn the line between workaholics and high-performers. 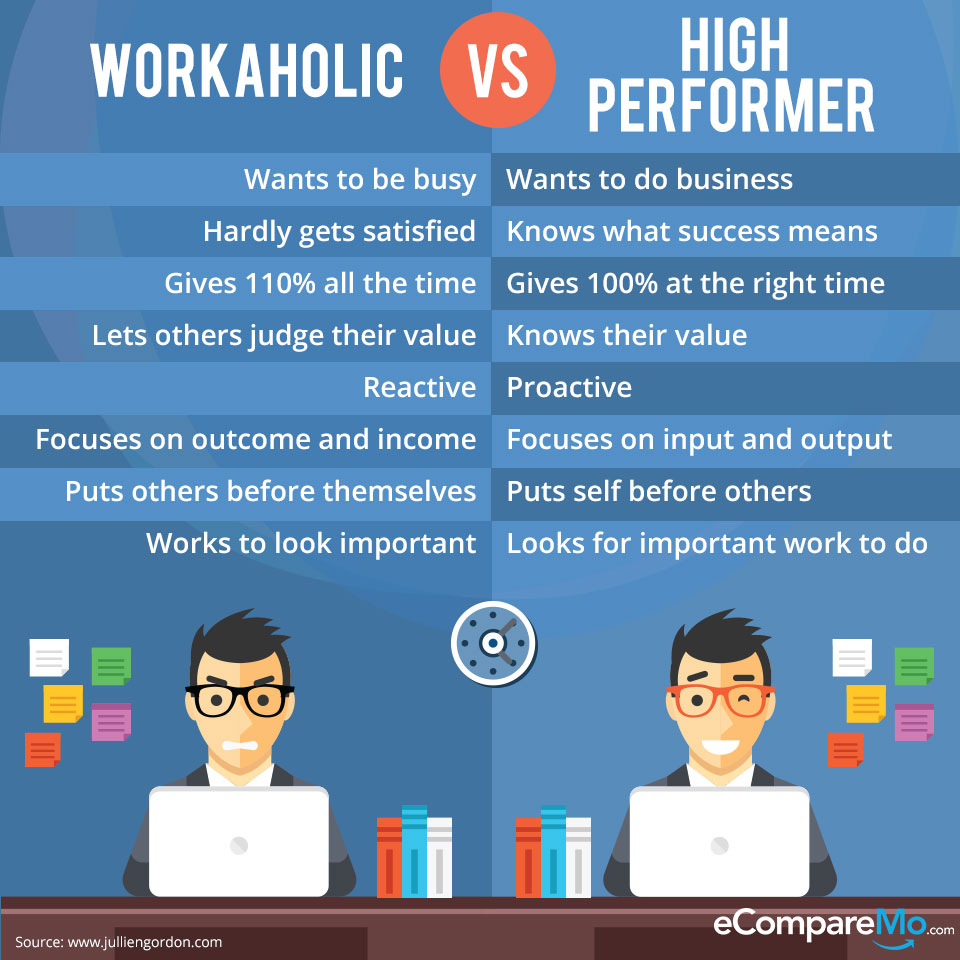 High performers may look like they are pinned under a mountain of work at times, but they do this because they have specific goals in mind, not because they want to create an illusion of doing something. “A high performer’s No. 1 goal is to do business,” Gordon writes. “The only thing that matters to them are results. If they can’t see a way to create value in the moment, they facilitate or strategize instead.”

(See Related Topic: Do You Want To Know The Secret To Finding Happiness At Work?)

Meanwhile, he says workaholics merely “fill any space in time with busy work because they feel insecure doing nothing. The insecurity comes from not knowing their value. They believe that the busier they are, the more important they must be.”

“Greed, for the lack of better word, is good,” said Gordon Gekko in 1987 film Wall Street. While it is not wrong to become ambitious for something more, high-performance workers know when to count when a win is a win—and this is something that workaholics cannot visualize. By contrast, workaholics keep on chasing goals as if there is a hunger in them that can never be satiated.

“A win is a win. High performers seek more in the areas that matters, but they know what enough is in the areas that don’t matter so much,” Gordon notes. “This comes from having a clear definition of success.” Meanwhile, workaholics are “always focused on more and seeking to maximize everything because they don’t really know what success means to them.”

It is important to give your best shot in everything. But high-performing people only give their 100 percent at the right time—and they keep on improving their performance to make sure that their full power will trump the workaholics’ 110 percent.

“A workaholic thinks ‘turn down for what?’ They hustle, grind, and go H.A.M. [hard as mother****er] all of the time,” Gordon says. “They have difficulty prioritizing what’s important—therefore, everything is important in their mind.” By having the inability to scale their efforts to match the level of importance of their tasks, workaholics often get lost in a sea of their to-do list, or worse, feel the burnout.

It is perfectly fine to feel inadequate of our skills, as this only means we may not become complacent at all. But once you’ve set up a healthy system to monitor your progress for improvements, you can see your value and know where you stand—like a true high performer. This, according to Gordon, is possible when you “create [your] own feedback loops rather than waiting on feedback from others.”

Workaholics, on the other hand, rely heavily on external feedback to measure their success. “[They] rely on external validation from their boss, colleagues, and clients, and thus work with a sense of fear,” he notes. “They wait for external evaluations such as mid-year or annual reviews done by others to understand how well they are doing.”

Some people like to autopilot their way to work; meaning, they only take the wheel if the situation gets out of control. While this may sound like a stress-free life, going with the flow and allowing others to dictate how your time goes makes you complacent and inefficient. “A workaholic is reactive about their time and work,” Gordon explains. “They allow other people to choose how their time gets spent working by reacting to emails, fires, unplanned events, and other distractions that arise throughout the day.

A high-performer, on the other hand, is proactive. “They design their day and anchor the most meaningful and important things in time first, and then they allow fires and other unplanned events to fill in the rest of their day. They don’t allow distractions to deter their strategy.”

Get matched with loans you're qualified for

There are a multitude of things beyond your control, and trying to rein them is merely a waste of time. For high performers, focusing on what they control is the paramount priority, since trying to focus on external variables is a waste of time. According to Gordon: “A high performer focuses on their effort—inputs and outputs. Only the individual knows if they gave the task at hand their best. They judge themselves against their best self as opposed to others.”

Meanwhile, this isn’t what workaholics recognize: no matter how much effort we put, there may be external factors that can make the outcome less favorable. “Even when we think we do our best, the outcome that occurs and the income that is derived from it is not fully in our control,” he adds. “Their desire to compare leads them to judge themselves using common metrics of success which aren’t always directly correlated to effort.”

(See Also: 5 Non-Motivational Books That Will Gear You Up For Success)

On self vs. others

Finally, workaholics and high-performers have a difference that may surprise you: the former focuses on others while the latter focuses on themselves. “A high performer puts themselves first because they know that by doing so, it allows them to serve others at a higher level,” Gordon explains. “At times it appears to be selfish, but it’s actually selfless because they want to give first-class service to those they work with and for.”

On the other hand, workaholics create the illusion that they cater to the welfare of others. But this paper-thin disguise is nothing but an unsustainable act to look important. Gordon explains: “When we constantly give more than we have and never take time to replenish our source, we end up depleted. This behavior is also driven by the good intention of service, but the desire to be needed and be the hero counters that intention.”

So in a nutshell, how does Jullien Gordon separate the two? According to him, “at the end of the day, workaholics do work to look important while high performers look for important work to do.” –Dino Mari Testa

There are subtle differences between the two, and some of them may surprise you. Technology may have made our lives much easi...