The Philippines has struggled with inflation for the past six months, and the poorest Filipinos seem to have been bearing the brunt of the rising prices of main commodities.

According to research from the group IBON Foundation, an estimated 60 million poor Filipinos are suffering income loss of about P993 to as much as P2,715 due to the worsening inflation.

How high is the inflation rate?

Now, if you are going to measure it using a base year—2012 for example—the rate of inflation in June 2018 is twice the rate in the same period of last year, June 2017, when it was 2.5%. It is even four times higher the 1.3% inflation rate since the start of Duterte administration in June 2016.

If measured using 2006 as the base year, the rate of inflation will result in the highest monthly inflation rate in over 10 years, making it 5.7% since March of 2009.

(Read: The Peso Is At Its Weakest In 12 Years. Here Are The Pros And Cons)

How is this affecting households?

From an estimation made by the Department of Finance (DOF) this 2018, the first to sixth income groups in the country have a monthly household income ranging from P7,724 to P21,119, with each group to cover 10% of the country’s approximately 23 million households arranged from poorest to richest.

Supposing that this monthly household income will be consistent during the first trimester of the year— which is from January to March—deflating such by the current and existing inflation rate monthly will cause a loss of household purchasing power, or a decrease in the number of goods and services you would be able to purchase.

Per IBON’s estimation during the first six months of the year, households in the six poorest deciles have lost the following amounts due to inflation.

What is causing this?

As a result of the increase in global oil prices, the crisis in rice, the depreciation of peso, and the freshly implemented Tax Reform of Acceleration and Inclusion (TRAIN) Law, increasing inflation is happening underway.

And out of all these proximate sources of inflationary pressure, TRAIN Package 1 is the one that the current administration can control.

The mitigating measures of the TRAIN Law are so far declining to reinforce the incomes of those Filipinos who are classified as the poorest and most vulnerable, as stated in the article made by IBON.

(Read:  What To Expect When TRAIN 2 Goes Full Speed Ahead)

The country, currently in its sixth month into high inflation, has only supported 3.8 million families out of the 10 million families targeted to receive the supposed unconditional cash transfers, leaving the other 6.2 million families struggling with higher TRAIN-driven prices for their basic goods and service needs, as added by the group. 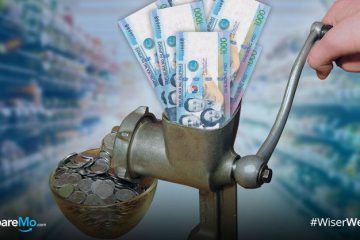