ADVISORY: eCompareMo is ready to serve you completely! We are now accepting applications for credit cards, personal loan, and car insurance.
6 min. read

Humans are designed to take a beating, but our delicate bodies aren’t made to withstand the intensity of a catastrophic car crash. Despite the resiliency of the human spirit, the World Health Organization (WHO) found out last year that around 10,379 fatalities are related to car accidents—and a quarter of these deaths occurred inside the vehicles involved.

Since a strong collision puts a lot of unbearable strain to the body, there is no way the human anatomy can emerge unscathed from a fatal car accident. If we want to survive a crash, what then should our bodies look like? An artist created a sculpture that is uniquely designed to survive the road’s most fatal accidents.

Humans aren’t physiologically evolved yet to become resistant to the challenges of modern life, so the Australian Transport Accident Commission tapped an artist in their latest road safety project. But instead of focusing on the dangers of car crash or its effects on the human body, the Australian government body wanted to see what it requires for us to be finally safe from car accidents.

They commissioned Australian artist Patricia Piccinini to draft her version of a man with reinforced body parts. Piccinini teamed up with Dr. Christian Kenfield, a trauma surgeon at the Royal Melbourne Hospital, and Dr. David Logan, road safety engineer for the Monash University Accident Research Centre, and created a human model that is anatomically car crash-proof.

The result? Graham—who looks sort of a crossover between Jabba the Hutt and Juggernaut, with some gruesome details added in the mix. 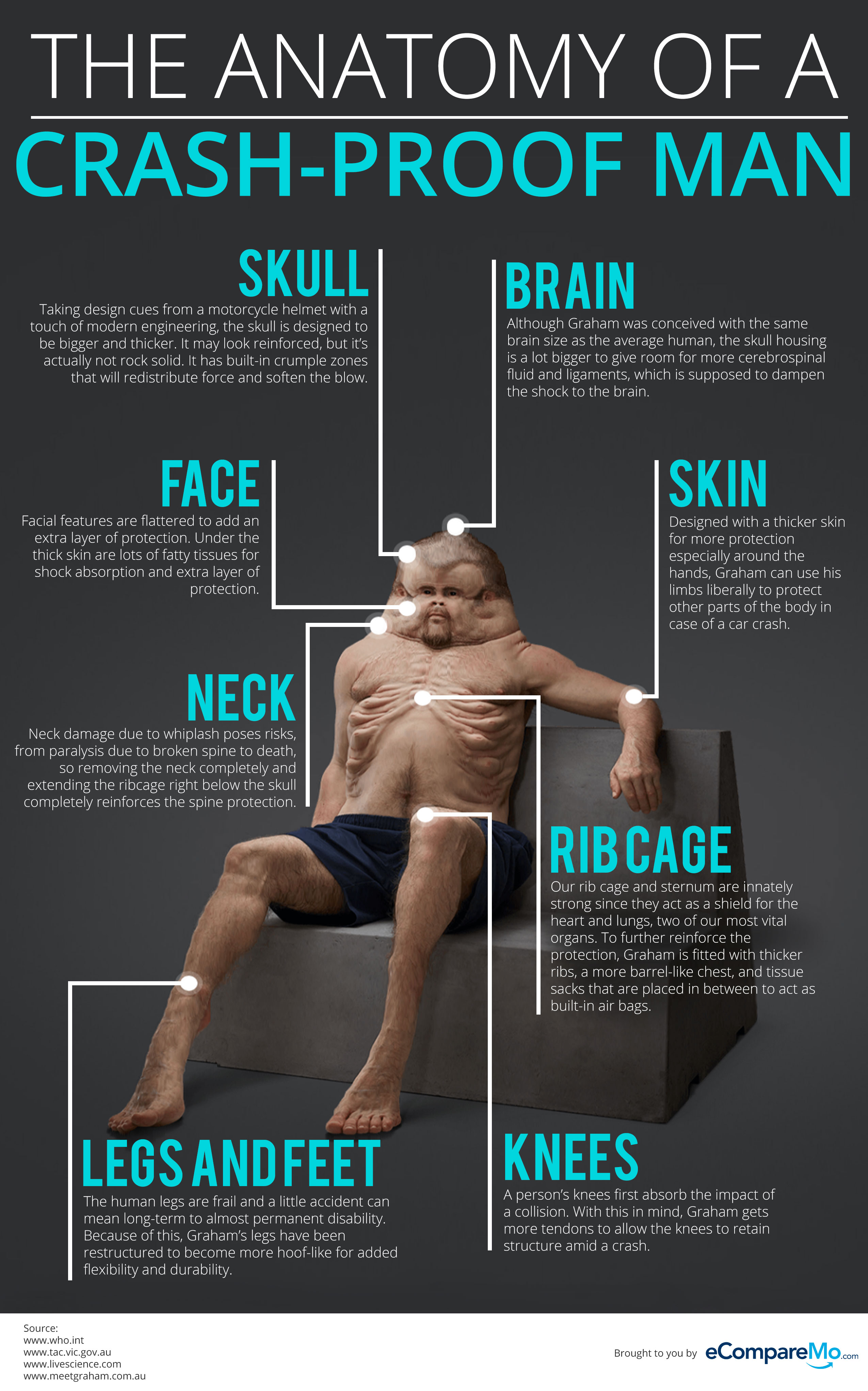 According to Live Science: “Graham has a massive skull, but his features are tiny and recessed. His enormous head perches atop a barrel-shaped trunk with no visible neck to support it. Rows of flaccid sacks vaguely resembling deflated breasts dangle between his ribs, and an extra joint protrudes halfway down his shins, which end in shortened, broad hoof-like feet.” While the horrendous beast may not be a looker, Graham was expertly designed to merely flinch on any car crash.

The anatomy of a car crash

To see how a road accident can harm the body, let us examine how Graham was modified to become the perfect car crash buddy:

• Brain. Although Graham was conceived with the same brain size as the average human, the skull housing is a lot bigger and there’s more cerebrospinal fluid and ligaments to dampen the shock to the brain.

• Skull. Taking design cues from a motorcycle helmet with a touch of modern engineering, the skull is designed to be bigger and thicker. It appears to have been reinforced, but it’s not rock solid; it has built-in crumple zones that will redistribute force and soften the blow.

• Face. During a car crash, the face can be subjected to a lot of injuries, ranging from blunt force trauma to cuts from broken glass. As an extra layer of protection, his facial features are flattered, with lots of shock-absorbing fatty tissues under his thick skin.

• Neck. Neck damage due to whiplash poses risks, from paralysis due to broken spine, to death, so removing the neck completely and extending the rib cage right below the skull completely reinforces the spine protection.

• Rig cage. Our rib cage and sternum are innately strong since it acts as a shield for the heart and lungs, two of the most vital organs we have. To further reinforce the protection, Graham is fitted with thicker ribs, a more barrel-like chest, and tissue sacks that are placed in between ribs to act as the body’s air bags.

• Skin. Abrasions and bruises will heal over time, but deeper cuts tend to leave scars that can remind people of a tragic accident they’ve been. Designed with a thicker skin for more protection especially around the hands, Graham can use his limbs liberally to protect other parts of the body in case of a car crash.

• Knees. Pedestrians hit by a vehicle often have their knees first absorb the car’s impact. With this in mind, they added more tendons to allow the knees to retain structure even in an event of a car crash.

• Legs and feet. The human legs are frail and a little accident can mean long-term to almost permanent disability. Because of this, Graham’s legs have been restructured. It’s now more hoof-like for added flexibility and durability.

To make the campaign more compelling, the Australian government put the sculpture on display at the State Library of Victoria. It will be there until August 8 before it goes on a road show. Aside from the physical installation, people can also interact virtually with Graham online.

Humans are designed to take a beating, but our delicate bodies aren’t made to withstand the intensity of a catastrophic car...

11 Things To Check Before You Start Driving Your Car Again

2020 Toyota Tundra Review: Is It Finally Coming To The Philippines?